Elevator at 59th Street Subway is a Repeat Offender

Elevator at 59th Street Subway is a Repeat Offender

MIDTOWN WEST — Ilanit Hersh rode the A train down from Washington Heights to 59th Street-Columbus Circle last week and headed for the station’s elevator with her two young children in tow.

She pushed the stroller into the empty elevator and the doors closed behind them, but the buttons for the upper level and the door open button both failed, leaving her and her family trapped inside.

After waiting several minutes, Hersh picked up the emergency phone inside the car and summoned a transit employee, who promised to send help.

Then she pressed the alarm button, catching the attention of a passer-by, who flagged down a worker in an orange vest who freed Hersh and her kids. To Hersh’s surprise, she was not the first straphanger to experience problems with the elevator.

“Apparently this one elevator has a reputation for breaking,” Hersh said.

In fact, the 59th Street station elevator was reported as being out of service eight times between June 15 and July 13, for a total of 43 hours and 15 minutes, according to NYC Transit. 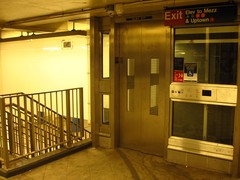 A mother and two young children were stuck in this elevator at 59th Street for 33 minutes earlier this month. (DNAinfo/Leslie Albrecht)

On June 21 it was out of service from just before 2 p.m. to just before 7 p.m., with no reason cited for the outage, said transit spokesman James Anyansi.

The elevator wasn’t working from 9 a.m. to 9 p.m. on June 24. It was fixed after workers adjusted the “slow-down switches,” Anyansi said.

On June 26 it was out for more than 14 hours. It was fixed after workers replaced seals in the elevator car, Anyansi said.

Anyansi said the outages were “minor problems.” He noted that in some cases subway elevators are out of service for several days.

“Elevators break down, especially public elevators,” Anyansi said. “These are minor glitches which are expected in any public facility.”

The elevator is one of five at the 59th Street stop that moms with strollers, people in wheelchairs and others who find stairs difficult rely on every day.

The station serves the 1, 2, A, B, C and D lines. Four of the elevators are operated by MTA, one is operated by Time Warner.

Some riders interviewed Wednesday said they were disturbed to hear about a mother and children trapped in the elevator.

“It’s a shame,” said 36-year-old Patricia Dinely, wheeling her two kids on a double-wide stroller. But she said the Columbus Circle elevator compared favorably to others she’s used. Her kids complain about the “stinky” elevators at Times Square, she said.

“God, that’s bad,” said 57-year-old Julian Thrasher of the Bronx. “They’ve got to get a better handle on it.” Thrasher, a messenger for dental labs, tries the elevator every day.

“I wind up taking the stairs half the time,” he said, because the elevators are too slow.

As for Hersh, she said her two-year-old daughter has learned a lesson. “Now she says, ‘Let’s take the stairs so we don’t get stuck,'” Hersh said.

For lift maintenance, platform lifts, lift installations and lift repair, make sure you speak to a lift company that provide the best lift service – Elevators Ltd